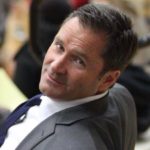 He is managing director of Running With the Bulls, LLC (www.runningwiththebullsusa.com), participates on the Business Constituency Committee at ICANN and is on the USGLC Utah Advisory Committee.

Mr. Warren has appeared on numerous radio programs, such as NPR, and his columns and comments have been published in Breitbart, The Daily Caller, Roll Call, The Wall Street Journal, Arizona Capitol Times, PJMedia.com, Washington Post, Politico, The Tampa Tribune, Cal News, Deseret News, and Washington Times. You can find some of these op-eds on www.chuckwarren.co.  He has recently co-authored a book "Expanding the Tent" featured on www.expandingthetent.vote and will be releasing his upcoming book "So You're Crazy and Want to Run for Political Office" in the fall of 2017.